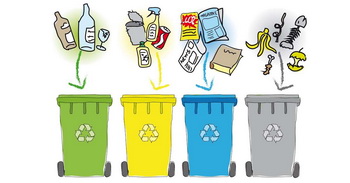 The results of the first six months of the KAYT (Know As You Throw) testing in the Life REThinkWASTE pilot areas of Varese and Bassano del Grappa are now available.

REThinkWASTE’s KAYT approach involves interaction with the user via whatsapp/telegram messages providing information and quizzes to stimulate proper waste collection among citizens. In addition, the “recycle and win” contest rewards the most interactive users who correctly answer the questions on separate waste collection with shopping vouchers in local shops.

In Varese, the KAYT experimentation involves the Bustecche and San Carlo neighbourhoods, with a significant proportion of social housing. During the testing period, a group of volunteers (eco-coaches) helped residents to improve waste separation, also by sending personalised messages and photos on how to properly dispose waste. On 23 July, during the Environmental Day, the most diligent users participating in the contest were awarded prizes.

The results of the first 6 months of KAYT testing in Varese tell that KAYT’s approach has given good results, decreasing the amount of undifferentiated waste delivered by 22%, as assessed by the citizens themselves who counted the exposed bags on a weekly basis.

In Bassano del Grappa, ETRA SpA, the project leader, is managing the waste collection service applying a dinamic tariff (PAYT – pay as you throw) since several years. Here, the KAYT approach is tested in an area of the city (zone D) where registered users, in addition to quizzes and information on correct waste management, receive personalised messages encouraging them to reduce the delivery of unsorted waste by increasing differentiated waste collection, highlighting the emptying carried out during the test in comparison with the previous year. Of the 247 citizens subscribed to the trial, 82% interacted with the messages within 48 hours and in 76% of those giving the correct answer to the quiz. In the first six months of the pilot 57 awareness-raising campaigns were launched with generic messages. While the sending of personalised messages for each user based on the data on the number of dry-cleaning operations started a few weeks ago, only three messages have been sent so far.

However, the data on the number of emptyings does not show a significant difference between the users who are participating in the contest and the others: both had an average of 3 emptyings in the first 6 months of 2021. It therefore seems that a KAYT approach based only on information messages and quizzes has not been very effective, but it will be necessary to observe in the second half of the year the effect of personalised messages, the number of which is still limited at the moment.

For a more accurate and scientific evaluation of the effectiveness of the messages ETRA will collaborate with the department of economics of the University of Verona, which will support the evaluation of the results in Bassano pilot.