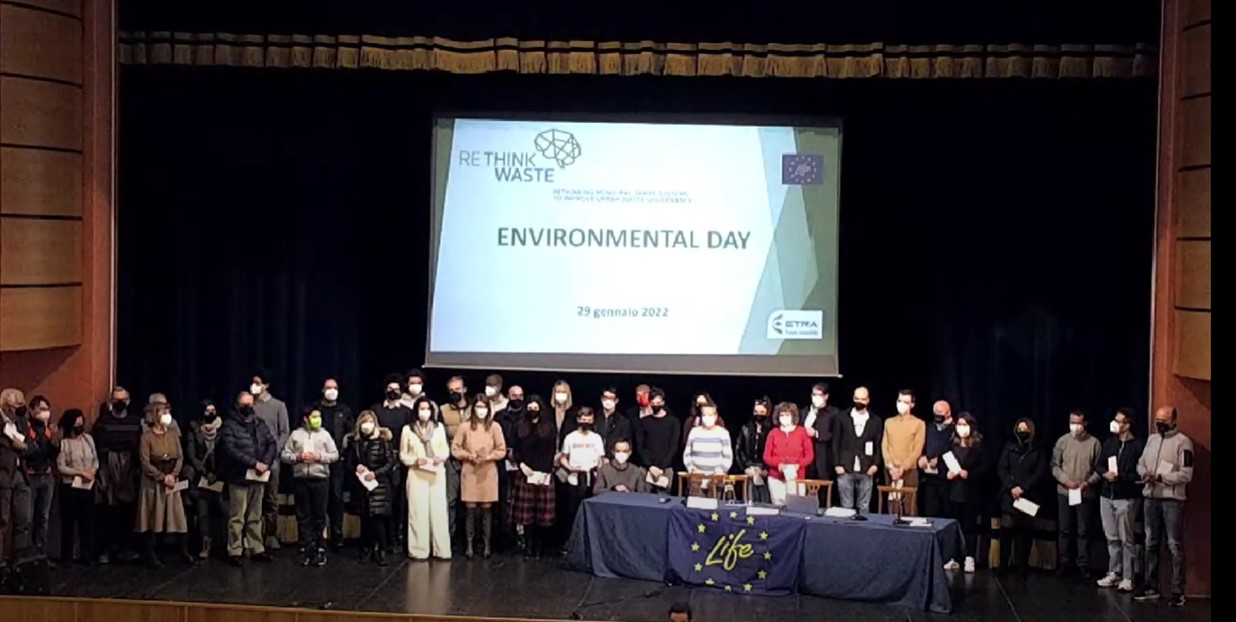 Saturday 29 January was held at the Remondini Theatre in Bassano del Grappa (VI) the Environmental Day of Etra, the final event of the pilot implemeted within the project.

During the event, the Life REthinkWASTE project was presented to the Mayors of the Etra member municipalities, to the representatives of the Basin Authorities and the waste managers of Veneto, as well as to the citizens who took part in the test. The event was well attended, both in person and online thanks to streaming on the YouTube channel: this demonstrates the sensitivity of local administrations to the project’s themes, i.e. the definition and testing of innovative approaches such as PAYT (Pay-as-you-throw) and KAYT (Know-as-you-throw) to further improve the environmental results of separate waste collection.

The event was opened by Riccardo Venturi, project coordinator, who presented the initiative, the partners involved, the actions, the objectives and the expected results.

Davide Donadio from IFEL illustrated the PAYT and KAYT approaches, with a focus on the Italian context.

The representatives of the other pilot areas – Bassano, Varese, Bitetto (BA) and Sant Just Desvern (Catalonia) – then spoke about their own experimentation of KAYT.

To point out that each pilot area has implemented the KAYT approach in a particular way in terms of content, i.e. according to its own collection and charging model; what is in common is the messaging platform used, which allows messages to be sent to registered users via WhatsApp, Telegram or SMS, and the participation incentive programme through the assignment of vouchers to the winners of a competition, which can be spent in affiliated shops or donated to local associations.

Some details on each experiences, which we invite you to deepen by consulting the respective presentations available for download:

– In Bassano, dynamic tariff (PAYT) has been active since 2017 and separate waste collection rate reaches almost 79%, with an annual production of residual waste of just over 100 kg per capita. Here, the testing of the KAYT approach involved a collection area in the city centre with around 5,000 households, for about 11,000 inhabitants. Throughout 2021, the 227 users who registered on the KAYT platform received weekly messages with information, quizzes and curiosity on waste separation, as well as updates on the number of unsorted waste deliveries made in order to monitor and improve their recycling performance. A survey carried out at the end of the pilot revealed a high degree of user satisfaction about the initiative, with many declaring that they had improved their waste sorting habits. Download the presentation

– In Varese (70%RD and 151 kg RUR per capita 2019) the PAYT is not yet implemented; the KAYT experimentation concerned two particularly populous neighbourhoods (Bustecche and San Carlo, n. 5.000 inhabitants), characterised by bloc of flats buildings. The KAYT approach favoured the game-participation aspect (gamification), by assigning scores to users for each correct answer given to quizzes, but also involving local volunteers (eco coaches) to verify the quality of waste delivery in the field, by sending photographs to the users of the apartment blocks concerned. The trial ended in December 2021. To learn more download the presentation

– The Municipality of Bitetto, in the province of Bari, has combined KAYT with the application of the dynamic tariff (PAYT), which provides for a “bonus-malus” system with scores, based on users’ behaviour and frequency of waste delivery, with measurement of all fractions, so not only of residual dry waste. In this case, KAYT helped citizens with the transition to the new tariff system. Learn more about the Bitetto tariff system here.

– Sant Just Desvern (58%RD and 209 kg RUR per capita 2019) is a municipality in the metropolitan region of Barcelona; the KAYT system, which is still being tested, was introduced in parallel with the introduction of a new collection system using controlled-access street bins: the residual and organic waste bins are opened with personal cards and it is possible to count the deliveries.

At the end of the first part of the morning, Giacomo Pieretti from ARPA Veneto presented the Action Plan for the promotion of PAYT and KAYT in Veneto, which aims to assist and support at least 50 municipalities.

At the end of the presentations a press conference was held, with speeches by Tiziana Stella (member of the Etra Management Board) and Andrea Viero (Councillor for the Environment of the Municipality of Bassano del Grappa). Both local and sectoral newspapers were present.

Finally, the 60 winners of Bassano’s “Riciclo e vinco!” competition were awarded €100 shopping vouchers, i.e. the users participating in the KAYT pilot who interacted most consistently with the messaging system.

The experimentation phase in Bassano is over: the follow-up phase is now beginning, with monitoring of the results. Other actions planned in the project continue, such as the analysis of big data, which, by processing the data of the waste deliveries, aims to reshape the waste collection routes in line with user behaviour in order to optimise resources and make the service more sustainable.

The full video of the Enviromental Day in Bassano is available on the project’s You Tube channel, while in the following section you will find the speakers’ presentations.

Davide Donadio, presentation of the KAYT and PAYT concepts

Francesco Rota, presentation of the pilot of Bitetto

Montse Aulinas, presentation of the pilot of Sant Just Desvern

Giacomo Pieretti, presentation of ARPAV’s Action Plan for the promotion of PAYT in Veneto