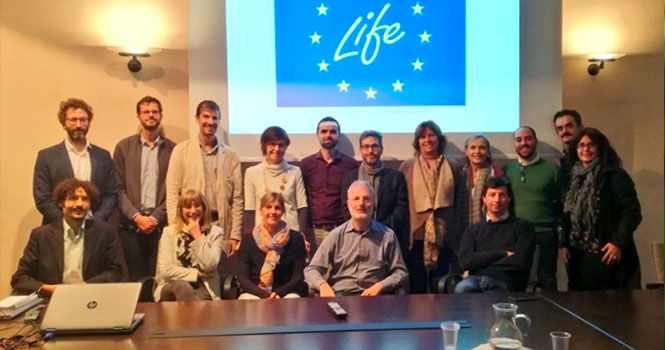 LIFE-RethinkWASTE. Kick-off meeting of our project

On 29-30 October 2019 took place the Life-REThinkWASTE project Kick-off meeting. The eleven partners of the consortium met at the ETRA’s headquarters in Padova, North-East of Italy, to discuss the main objectives, goals and timeline of the project.

ETRA is the REthinkWASTE project leader; it is a fully public company of Veneto region dealing mainly with integrated water supply, waste management and renewable energy services; the other the 10 partners come from 4 different European countries, 6 from Italy, 2 from Spain, 1 from Belgium and 1 from Denmark.

During the meeting ETRA introduced the main topics of the project and illustrated its methodological approach, while each partner illustrated the project actions placed under its own responsibility and focused on the preliminary tasks to achieve for making the project successful.

A special emphasis was given to the 4 test-bed areas, that will have to implement in their own territories the “Pay-as-you-throw” (PAYT) and “Know-as you-throw” (KAYT) approach. They are Bassano del Grappa (Italy, Veneto region), where the test will be managed by ETRA, Varese (Italy, Lombardia region), Fabriano (Italy, Marche region) and San Just Desvern (Spain, Catalunya region).

A relevant role in the project will be also played by those partners of international and national/regional relevance, such as ACR+(Association of Cities and Regions for sustainable Resource management) from Belgium, IFEL – the Institute for local finance and economics (from Rome, Italy), ARC (the Waste Agency of Catalunya, Spain), ARPAV (the Agency of Veneto Region for the prevention and protection of the environment) and ATA 2 Ancona, that is the Convention between the Municipalities of the Province of Ancona for the supra-municipal management of the integrated cycle of urban waste. Other technical partners of the consortium are ARS ambiente (from Italy) and 2.-0 LCA from Denmark.